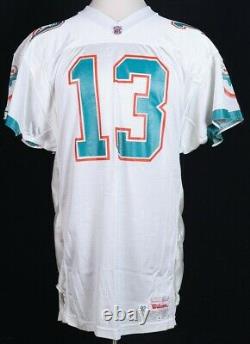 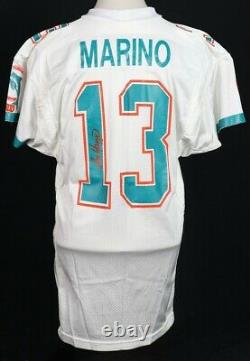 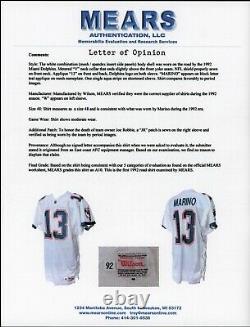 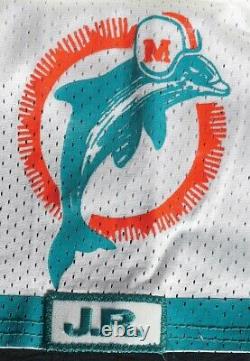 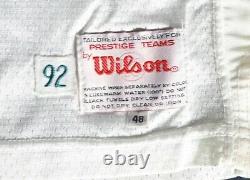 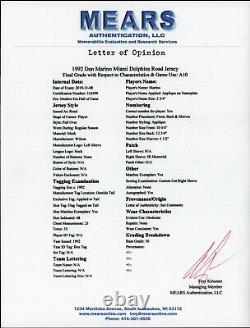 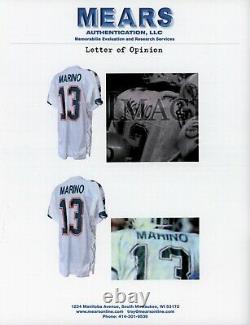 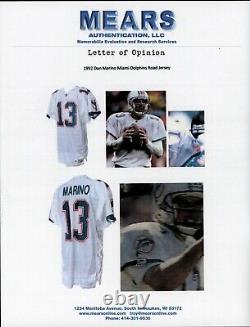 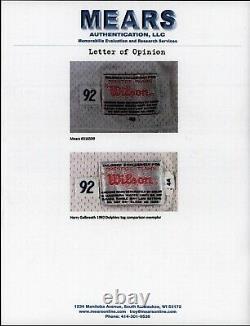 Extraordinary Dan Marino 1992 Miami Dolphins Game Worn & Signed Road Jersey MEARS A10 & a Full PSA/DNA LOA for the Dan Marino 13 Autograph. No discussion of the NFL's greatest all-time quarterbacks could possibly exclude the immortal Dan Marino who for 17 spectacular seasons, displayed his world-class skills donning a Miami Dolphins uniform. Regarded as arguably having the quickest "release" in NFL history, Marino riddled defenses for a whopping 61,361 yards via nearly 5,000 completions while tossing an incredible 420 career touchdowns. Joining the Dolphins in 1983, he immediately set the gridiron world on fire with his dynamic passing arm and claimed the NFL's rookie of the year award.

Those numbers would easily earn his first and only NFL MVP Award while leading the Dolphins to the AFC Championship. Although they would ultimately lose to Joe Montana's Forty-Niners in Super Bowl XIX, Marino's 1984 performance had already stamped an indelible mark on his hallowed legacy.

His list of accolades is seemingly infinite including 9 All-Pro appearances, the aforementioned Rookie Of The Year and MVP awards, 5 seasons surpassing 4,000 yards, 7 seasons of surpassing 3,000 yards, 5 times leading the league in passing yards, 3 times leading the league in TD passes, selected as a player on the NFL 100th Anniversary All-Time team and a member of the Pro-Football Hall of Fame. He was absolutely worshiped by an adoring football nation, and his "cannon-like" passing arm will forever be considered one of the most powerful arms in NFL history. It is therefore with little surprise that avid football enthusiasts actively seek his most treasured artifacts with none of them more desirable than a game used jersey from his legendary playing days.

In lieu of Marino's stupendous career achievements, we are proud to present this magnificent Dan Marino 1992 Miami Dolphins game worn road jersey that has been assessed with a PERFECT A10 score by the prestigious MEARS authentication company! Additionally, Marino has signed this spectacular memento in bold orange sharpie on the verso's #1 aqua-marine block letter, adding a "13" to his vertically positioned autograph. Showing excellent game use and no restoration, this Wilson manufactured white combination body shell garment (including mesh/spandex insert side panels) reveals Marino's iconic aqua-marine/orange hued #13 on the front, back, and both his shoulders, with the Dolphins classic logo affixed to both sleeves. The Wilson label indicates both the correct "48" size and a "92" tag representing the 1992 season that this sensational heirloom was worn by the great Marino.

Additional attributes include the critical MARINO nameplate appearing as block letter teal applique on a mesh nameplate, as well as an additional "JR" patch on the right sleeve to honor the death of team owner Joe Robbie. Originating from an East Coast AFC equipment manager, all of these aforementioned attributes as well as the additional details on the extensive MEARS LOAs are "dead-on" consistent with the Miami Dolphins 1992 road jersey, justifying the A10 assessment. One of the finest Dan Marino game worn jerseys you will ever come across; it rekindles fond memories of the how the immortal Marino electrified his avid fan base via his lightning fast tight spirals that typically found their way into the opponents end zone. Interestingly enough, the 1992 season would see Marino eclipse the 4,000-yard mark for the fourth time in his illustrious career, completing nearly 60% of his passes while tossing a formidable 24 touchdowns. That said, we cannot imagine a finer testament to not only that stellar campaign but Marino's sensational career than this autographed 1992 game used Miami Dolphins #13 road jersey that has retained virtually all of its original factory issued qualities!

- FULL MEARS A10 LOA & a FULL PSA/DNA LOA for the Dan Marino Signature. We offer the finest in Sports Memorabilia and autographs. The item "The Finest Dan Marino 1992 Game Used Signed Miami Dolphins Jersey MEARS A10 PSA" is in sale since Tuesday, June 23, 2020. This item is in the category "Sports Mem, Cards & Fan Shop\Game Used Memorabilia\Football-NFL\Jerseys".