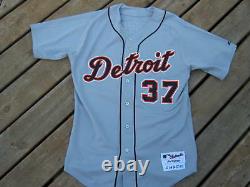 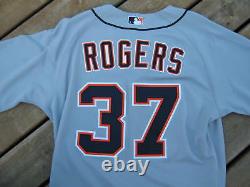 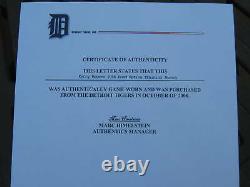 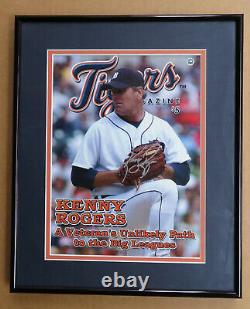 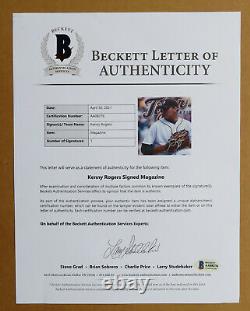 This is a Kenny Rogers game used Detroit road jersey from 2006 Spring Training complete with letter of authenticity straight from the Detroit Tigers Organization. Also included is a framed & matted signed program, again from the Tigers organization, along with a Beckett letter of authenticity for the signature. The numbering on the Jersey label : 37 (jersey #37 Kenny Rogers) - 44 (size) - 06 (Yr 2006) - ST (Spring Training) - 077 maybe 77th jersey out of #? The Detroit Tigers went on to play in the World Series that year and Kenny Rogers played a big part in getting them there. Rogers had a 17 - 8 record with a 3.84 ERA that year.

A great pitcher and arguably the best fielding pitcher in the game, he had several successful seasons with the Tigers and was a selfless mentor to several of the rookie pitchers on the team. Career highlights include 2 Gold Gloves, 200 Career Wins, plus he pitched a Perfect Game. The item "Kenny Rogers Detroit Tigers Game Used Jersey 2006, Signed Program Beckett COA" is in sale since Tuesday, July 20, 2010.

This item is in the category "Sports Mem, Cards & Fan Shop\Game Used Memorabilia\Baseball-MLB\Jerseys". The seller is "acme_sports_collectibles" and is located in Ortonville, Michigan. This item can be shipped to United States.