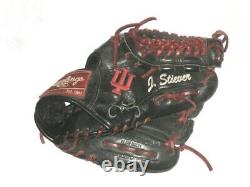 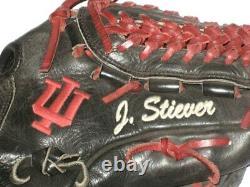 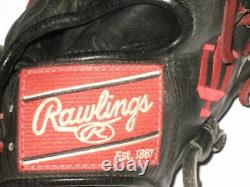 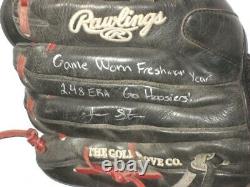 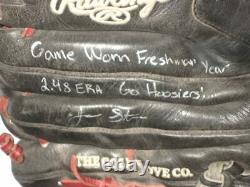 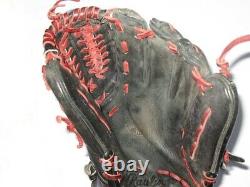 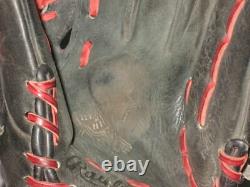 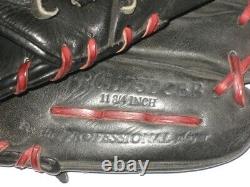 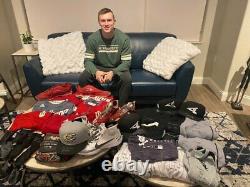 Jonathan Stiever Indiana Hoosiers Game Worn & Signed Rawlings Heart of the Hide Baseball Glove - Worn Freshman Year, 2.48 ERA! Jonathan Stiever is a professional baseball pitcher for the Chicago White Sox of Major League Baseball (MLB). He played college baseball at Indiana University and was selected by the White Sox in the fifth round of the 2018 Major League Baseball draft. He made his MLB debut in 2020. Stiever attended Cedarburg High School in Cedarburg, Wisconsin, where he played football and baseball, earning All-State honors in both sports his senior year.

In 2015, his senior baseball season, he went 7-1 with a 1.90 ERA. Undrafted in the 2015 Major League Baseball draft, he enrolled at Indiana University where he played college baseball. In 2016, Stiever's freshman year at Indiana, he made 18 appearances (four starts), going 1-1 with a 2.47 ERA while striking out thirty over forty innings of work.

That summer, he played in the New England Collegiate Baseball League with the Vermont Mountaineers. As a sophomore at Indiana in 2017, he started 14 games, pitching to a 4-4 record and a 4.13 ERA over 77 innings.

Following the year, he played in the Cape Cod Baseball League with the Brewster Whitecaps. In 2018, Stiever's junior season, he went 5-6 with a 3.41 ERA over 16 starts, striking out 97 over 100 innings. After the season, he was selected by the Chicago White Sox in the fifth round of the 2018 Major League Baseball draft. Stiever signed with the White Sox and made his professional debut with the Great Falls Voyagers, going 0-1 with a 4.18 ERA over 13 starts. In 2019, he began the year with the Kannapolis Intimidators before earning a promotion to the Winston-Salem Dash in June.

Over 26 starts between both clubs, Stiever went 10-10 with a 3.48 ERA, striking out 154 batters over 145 innings. He was named MLB Pipeline's White Sox Pitching Prospect of the Year. Stiever was called up to the major leagues on September 13, 2020, and started against the Detroit Tigers that same day.

He pitched 3+2/3 innings, gave up two hits, walked two, gave up one run, and struck out three. To begin the 2021 season, Stiever was assigned to the Charlotte Knights.

He was recalled by the White Sox on April 25, appeared in that night's game and was optioned back to Charlotte the next day; he did not make another appearance for the White Sox during the 2021 MLB season. Over 17 starts with Charlotte, Stiever went 5-5 with a 5.84 ERA and 88 strikeouts over 74 innings. In August, he underwent surgery on his latissimus dorsi muscle ending his season prematurely.

In Stiever's freshman year at Indiana, he made 18 appearances (four starts), going 1-1 with a 2.48 ERA while striking out thirty over forty innings of work. The talented White Sox Prospect has signed the Glove and added Game Worn Freshman Year 2.48 ERA Go Hoosiers! The Glove shows great use! Sweet College Gamer from the White Sox Pitcher!!