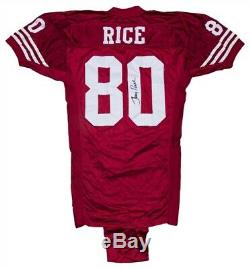 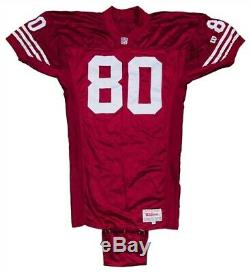 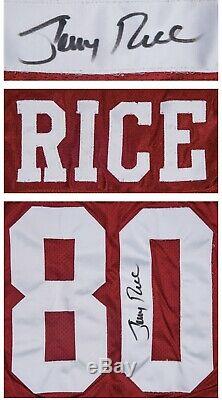 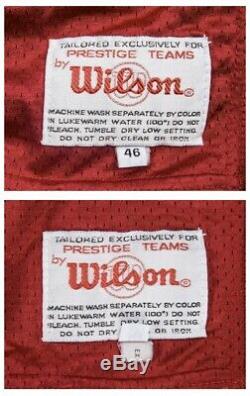 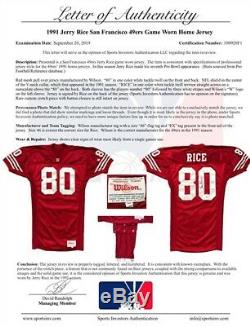 San Francisco 49ers wide receiver Jerry Rice wore this jersey during the 1991 NFL season, his seventh in the NFL. Already considered one of the best wideouts in the game, Rice snagged 80 catches for 1,206 yards and a league-high 14 touchdowns in 1991.

Rice would go on to play 13 more seasons in the NFL, finishing his career as the all-time leader in touchdowns and receiving yards. Rice was inducted into the Pro Football Hall of Fame in 2010. This red home jersey has Rices number 80 sewn on the chest, sleeves, and back in white tackle twill.

RICE is sewn across the back shoulders in white tackle twill on a matching red nameplate. Three white screen-printed stripes adorn the sleeves, with the left sleeve sporting an additional Wilson logo. A NFL logo patch is sewn on the base of the v-neck collar. A Wilson tag with a size 46 flag is sewn on the front left tail of the jersey.

This jersey shows light to moderate game wear, evident primarily in the puckering of the numbers. This jersey also has a three-buttoned crotch strap. Rice signed his name vertically on the 0 digit on the back in black marker. This item comes with a COA from Beckett Authentication for the signature (D84640) and a LOA from Sports Investors Authentication (190920F1) for the game use. The item "Jerry Rice San Francisco 49ers Game Used Worn Jersey 1991 Signed LOA" is in sale since Monday, November 18, 2019.

This item is in the category "Sports Mem, Cards & Fan Shop\Game Used Memorabilia\Football-NFL\Jerseys". The seller is "gameusedgamers" and is located in Cincinnati, Ohio.