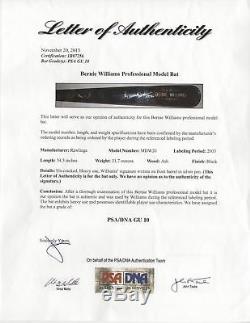 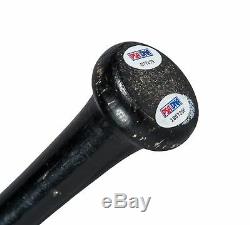 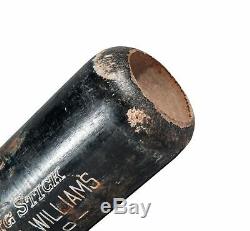 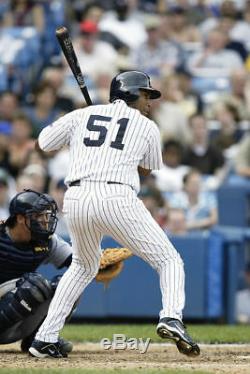 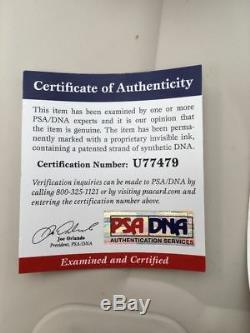 Incredible 2003 Bernie Williams Signed Game Used Baseball Bat PSA DNA GU 10! In an era where players often move from team to team, Bernie Williams played his entire 16-year career with the New York Yankees and was a member of four World Series championship teams with the pinstripes. Williams was a five-time All-Star, won four Gold Glove Awards, an American League batting title, a Silver Slugger Award and an ALCS Most Valuable Player Award. A Bronx and MLB favorite, Williams number 51 was retired by the Yankees in May 2015. This un-cracked Rawlings MDW20 model bat was used by Bernie Williams during the 2003 season as referenced by the labeling period, factory ordering records and player use characteristics.

The bat exhibits tremendous game use as it is hammered with apparently dozens of ball marks, all fixated up and around the sweet spot on the barrel. There are also a few spike marks and a light coating of pine tar up near the label. On the sweet spot is a bold, silver Sharpie Bernie Williams SDG signature.

Williams was known for the SDG inscription that stands for "Solo a Dios la Gloria, " which roughly translates to to God be the glory. This bat was from Williams last World Series season with the Yankees and understandably was awarded PSA/DNAs highest grade of GU10.

Full LOA from PSA/DNA, cert number 1B07256 for the bat; and COA from PSA/DNA, cert number U77479 for the signature. We specialize in sports autographs and memorabilia. We have one of the largest selections of baseball autographs in the country. The item "Incredible 2003 Bernie Williams Signed Game Used Baseball Bat PSA DNA GU 10" is in sale since Monday, February 1, 2016.

This item is in the category "Sports Mem, Cards & Fan Shop\Game Used Memorabilia\Baseball-MLB\Bats". The seller is "showpiecessports" and is located in Deal, New Jersey. This item can be shipped worldwide.