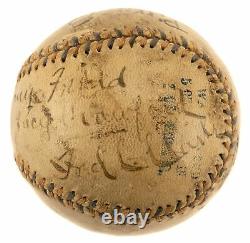 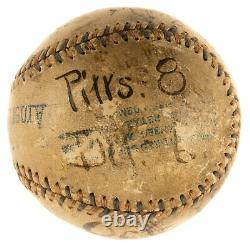 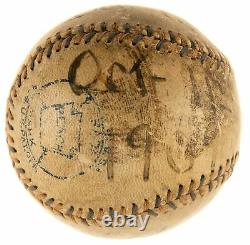 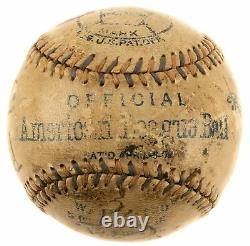 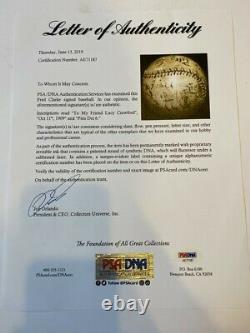 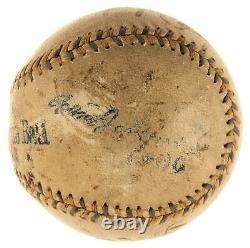 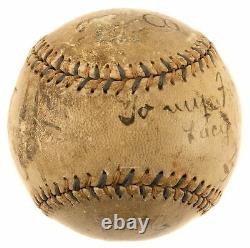 Historic 1909 World Series Game Used Baseball Fred Clarke Signed & Inscribed PSA. Presented here is one of the most significant baseballs we have ever offered: a ball signed by Fred Clarke that, based upon Clarke's notations on the side panels, was used during Game 3 of the 1909 World Series between the Pittsburgh Pirates and Detroit Tigers, held at Bennett Field in Detroit. The official American League (Ban Johnson) ball, which features the special one-year-only "1909" factory stamping below Ban Johnson's facsimile signature, has been inscribed To my friend/Lucy Crawford/Fred C. Clarke in black fountain on a side panel. While single-signed Fred Clarke balls are exceedingly rare (we have seen fewer than five others, all of which were signed during his retirement days), it is his additional black fountain pen notations on two separate side panels which truly distinguishes this example. One panel reads "Oct 11/1909, " and another Pitts.

This ball was used in Pittsburgh's victory over Detroit in Game 3 of the 1909 World Series. Interestingly, the last out in Game 3 was made by the Tigers Jim Delhanty, who lined out to Pirates left fielder Fred Clarke. Given that circumstance, there is a very good chance this ball represents the final out of Game 3. Game-used World Series balls dating from the dead ball era are practically nonexistent, making this both an exceedingly rare and important early baseball relic.

The 1909 World Series remains one of the most memorable on record, as it showcased the talents of the two greatest players of the dead-ball era: Ty Cobb and Honus Wagner. At the end of the Series, Wagner emerged victorious on both counts, as his Pirates captured the Championship in seven games and his average of. 333 bested Cobb's disappointing.

The ball is moderately soiled and displays a number of small abrasions that are consistent with its game-used status. In Very Good condition overall. A Cooperstown Baseball Hall Of Fame Museum worthy relic.

We specialize in sports autographs and memorabilia. We have one of the largest selections of baseball autographs in the country. The item "Historic 1909 World Series Game Used Baseball Fred Clarke Signed & Inscribed PSA" is in sale since Wednesday, September 25, 2019. This item is in the category "Sports Mem, Cards & Fan Shop\Autographs-Original\Baseball-MLB\Balls".