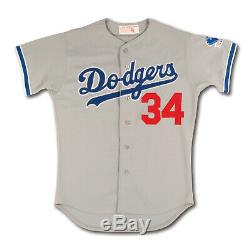 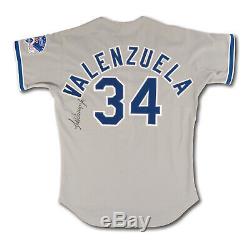 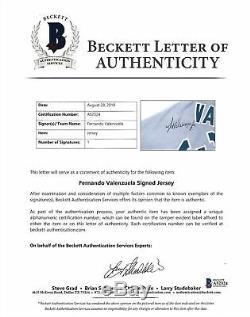 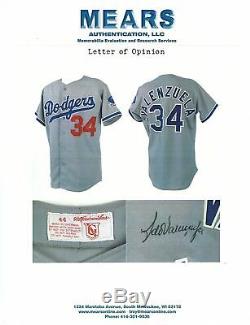 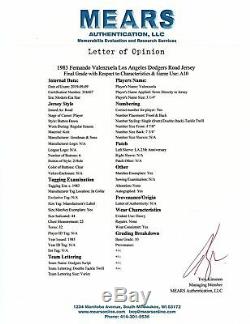 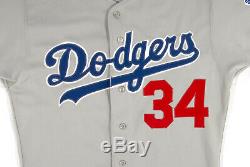 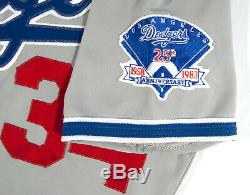 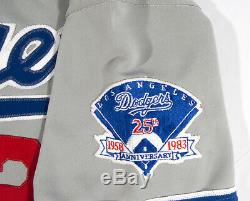 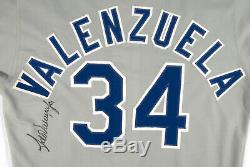 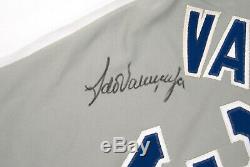 Fernando Valenzuela Signed 1983 Los Angeles Dodgers Game Used Jersey MEARS A10! Fernandomania began on Opening Day, 1981, when a 19-year-old rookie from Mexico got the last-minute nod to take the mound for the Dodgers.

With a distinctive skyward glance at the top of each windup, Fernando Valenzuela shutout Houston to begin the Los Angeles Hispanic communitys love affair with Los Doyers. In a Valenzuela won 13 games for the World Champion Dodgers during that strike-shortened rookie campaign, taking home NL Rookie of the Year honors as well as the Cy Young Award after leading the league in strikeouts (180) and shutouts (8) with a miniscule 2.48 ERA. He followed it up with 19 wins the next season.

In 1983, Fernando wore this offered road jersey as he won another 15 games, four of them by shutout, cementing his reputation as one of the best starters in the National League. The gray knit jersey has the iconic Dodgers script across the front in blue and white tackle twill with Fernandos number 34 below in red. Blue and white trim rings each sleeve end and a size 44 Goodman & Sons label is sewn inside the collar. The back of the jersey has VALENZUELA in semicircle arch over his number 34 in blue and white tackle twill. The Dodgers ace has signed the back of the jersey in black marker, completing this outstanding gamer from MLBs first Mexican-born superstar.

Includes LOA from MEARS graded a perfect A10 (316467), plus a Beckett LOA (A52324) for the autograph. We specialize in sports autographs and memorabilia.

We have one of the largest selections of baseball autographs in the country. The item "Fernando Valenzuela Signed 1983 Los Angeles Dodgers Game Used Jersey MEARS A10" is in sale since Thursday, October 31, 2019.