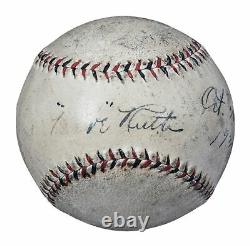 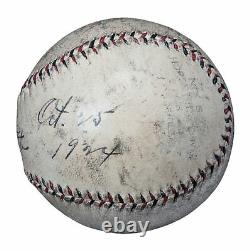 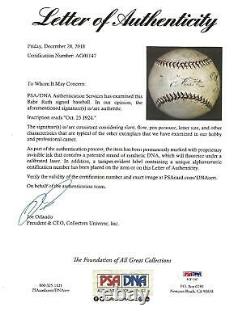 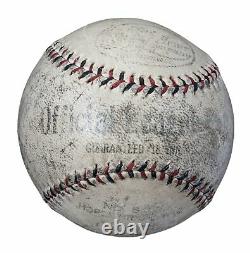 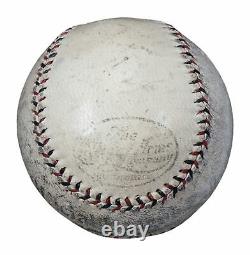 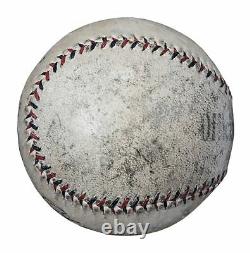 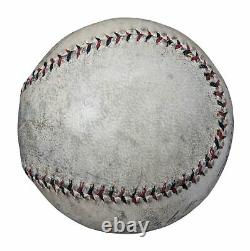 Extraordinary Babe Ruth Single Signed Oct 25, 1924 Game Used Baseball PSA DNA. This ball is the embodiment of the excitement and drama that surrounded Babe Ruth in his prime.

After the 1924 season in which he hit 46 home runs, the Babe embarked on an exhibition tour of the West Coast. This was a time when the two most western major league teams were located in St. Louis, and the majority of the country knew Babe Ruth and his home run exploits solely through newspaper accounts.

Thus, any opportunity to see baseballs greatest sensation in real life turned into a public event of colossal proportion. That was the atmosphere when Babe Ruth arrived in San Francisco on October 25, 1924. Over 2,000 fans turned out to watch Ruth simply stand at the plate in Exhibition Park and hit home run after home run into the stands. Newspaper reports from the time claim the home run king hammered a whole gross of balls out of the park that afternoon, and that spectators watching from the porch of a nearby house had to seek shelter inside lest they be hit by Ruths relentless blasts. The home run show warmed up the crowd and got the town good and ready for the following days events: a 10:30 morning game in Oakland followed by a 2:30 afternoon game in San Francisco.

This extraordinary ball dates from that day in 1924 when Ruth demonstrated to West Coast fans just what all the excitement surrounding him was all about. The owners grandfather obtained this ball back on October 25, 1924 and it has remained in the family until now. The Babe has signed the ball in black fountain pen, right on his customary sweet spot position.

As was his custom prior to circa 1927, Ruth has added quotation marks to Babe. In addition to the signature, the great slugger has inscribed the ball with Oct. The ball shows good use with scuffing and turf marks and may be a home run game used ball. A great early Ruth single signed/inscribed ball with family provenance.

The ball comes with a LOA from PSA/DNA (AG01147) for the signature. We specialize in sports autographs and memorabilia. We have one of the largest selections of baseball autographs in the country. The item "Extraordinary Babe Ruth Single Signed Oct 25, 1924 Game Used Baseball PSA DNA" is in sale since Friday, March 15, 2019.

This item is in the category "Sports Mem, Cards & Fan Shop\Autographs-Original\Baseball-MLB\Balls". The seller is "showpiecessports" and is located in Deal, New Jersey. This item can be shipped to United States, Philippines, Cayman islands.