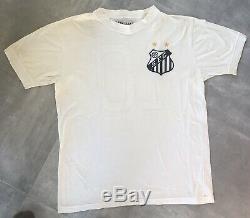 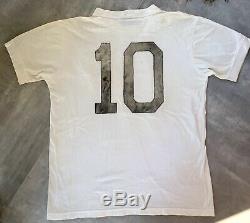 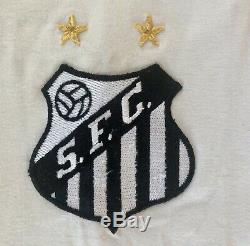 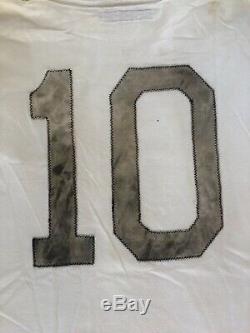 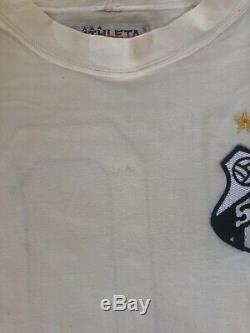 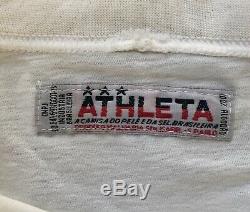 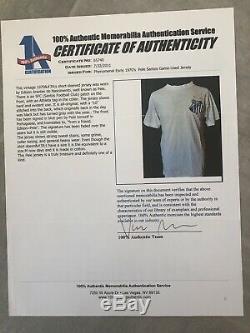 Early 1970s Pele SFC Santos Game-Used Signed Soccer/Football Jersey. The most popular player in the most popular sport in the world, Pele was named Edson Arantes do Nascimento upon his birth in Brazil in 1940, after inventor Thomas Edison. Given the nickname "Pele" during his school days, he was scouted and invited to play amateur ball by age 11.

Signed to the professional team "Santos Futebol Clube" (SFC) at the age of 16, Pele scored four goals in his first game and within ten months was called up to the Brazilian National Team. The Brazilian League was at the time considered to be the best in the world, and Pele's Santos the best team. When he retired from Brazilian soccer in 1974, he had three World Cup victories under his belt and came to America to play for the New York Cosmos of the fledgling NASL. When he fully retired in 1977, he had a total of 1281 goals in 1363 matches, the highest goalscorer in professional soccer history. In his 92 appearances for the Brazilian National Team, Pele scored 77 goals (third highest all-time), 12 of which were in the World Cup (fourth all-time).

He is one of only four players to ever scored in two different World Cup Final matches. In 2000 Pele was named "Footballer of the Century" by FIFA. This white heavy cotton soccer jersey was game used by Pele as a member of Santos. On the front left breast is sewn on the black and white embroidered chain stitch Santos team logo shield. Above this are sewn on two yellow embroidered chain stitch stars, ostensibly for Santos' two International Cup Championships in 1962 and 1963. On the back is sewn on the player number "10" done in black cotton and faded either through washing or age. Jersey shows great use with several stains and appears to have no alterations of any kind. The front is signed and inscribed in blue pen in Portuguese which translates to from a friend, Edison Pele. This inscription has faded significantly with age but is still legible. The item "Early 1970s Pele Match Worn/ Game Used/Signed Santos Jersey LOA/COA" is in sale since Thursday, March 26, 2020.