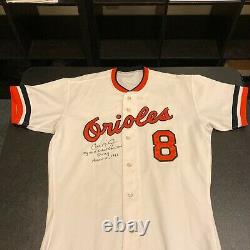 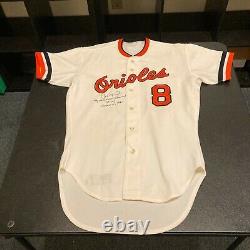 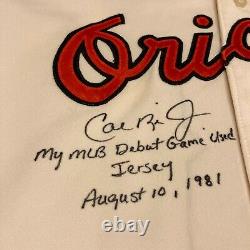 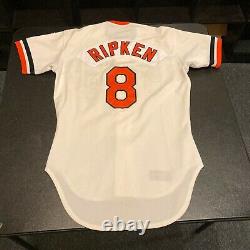 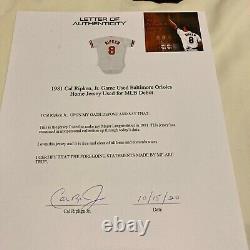 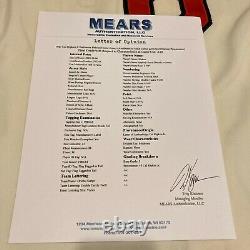 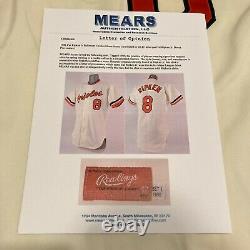 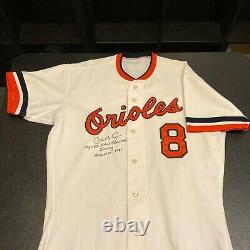 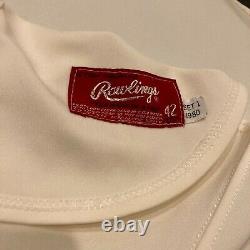 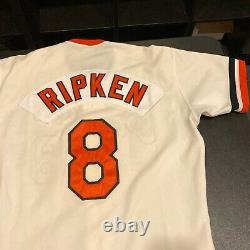 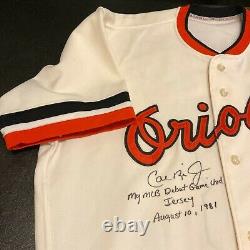 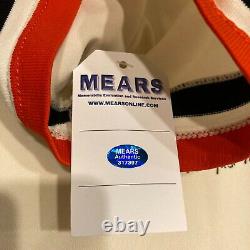 This is the jersey that started Cal Ripken, Jr. On the road to Cooperstown. You could say that baseball is in the Ripken familys DNA. Followed his brother Oliver from the sandlots to the semi-pro ranks, then went on to a long career in the Orioles farm system. Was managing in the minors when he and wife Vi had their first born, named Cal after his father. At the age of three he knew he wanted to be a ballplayer and by fifth grade, Junior knew the game as well as an adult. In high school he was already ensconced at his customary shortstop position, though he could also be counted on to pitch. As a senior, Cal struck out 17 as he pitched Aberdeen High to the Maryland State Championship. It was only natural that his Dads employer would be interested in this young phenom, and the Orioles drafted him in the second round of the 1978 draft. His first season in pro ball saw Cal struggling a bit, but his sophomore year showed what could be expected from him; a. 303 average, league-leading 28 doubles, and most prophetically, appearing in every single one of the Miami Orioles games. His performance earned him a late season call up to the Os AA team in Charlotte where he hit three home runs in 17 games. Playing all of 1980 with Charlotte, Ripken set the teams single season home run record and led the team to the Southern League Championship. With Rochester, Baltimores top farm club. Facing AAA pitching, Cal hit. 288 and was named the International Leagues Rookie of the Year. It was only natural that he got the call to the big club. Cal reported to the Orioles in the first week of August 1981. As a late season call up, the clubhouse manager issued Cal with one of the teams jerseys from the previous season.

It was at this time that he was given the number 8 that became synonymous with him for the rest of his career. According to Cal in his book, The Only Way I Know, Some guys are particular about their number, but I didn't care. I was just happy to have any major league uniform with any number. In the minors I'd worn 16, 7, 12, and 5, respectively.

If I'd thought about it, which I didn't, I might have preferred 7 with Baltimore, because that was Dad's number throughout his years managing in the minors. Wearing this jersey, Cal made his Major League debut on August 10, 1981 against Kansas City. Earl Weaver put the rookie in as a pinch runner in the 12th inning and he promptly scored the winning run on a John Lowenstein single.

Weaver used him as a pinch runner again two days later in the first game of a doubleheader. In the second game Cal went hitless in two at bats but recorded his first big league hit on August 16 against the White Sox.

In his short stint with the Os in 1981, Cal demonstrated through his fielding, bat and drive that he was indeed Big League material. Hed make the Orioles roster out of spring training the next year and starting May 30, 1982 would play in every single Orioles game for the next 16 years. This home white jersey has Orioles across the chest in orange and black tackle twill script above his immortal number 8 in the same colors. The collar and sleeve openings are ringed in orange, black and white ribbing. A red size 42 Rawlings label is sewn inside the right front tail along with a SET 1 1980 hang tag.

The six buttons are intact and appear to be original to the jersey. A tremendous piece of the Ripken story, an historical artifact that was worn by one of baseballs greatest heroes as he began the career that would see him breaking one of sports most untouchable records. Ripken signed the jersey and inscribed "My MLB Debut Game Used Jersey August 10, 1981". This jersey comes with a signed LOA from Cal Ripken, Jr. For the game use and a LOA from MEARS (317397) for the game use, who have graded this jersey its highest grade of A10. Full letter JSA COA for the autograph and inscriptions. We offer the finest in Sports Memorabilia and autographs.