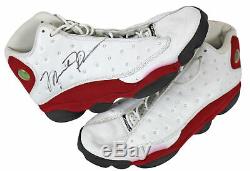 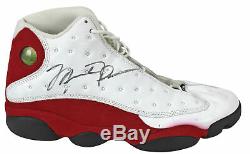 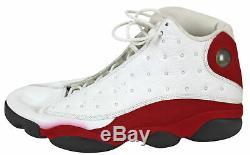 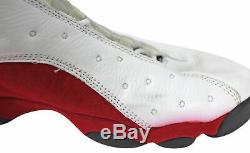 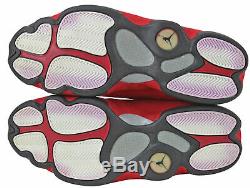 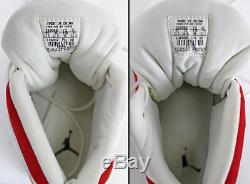 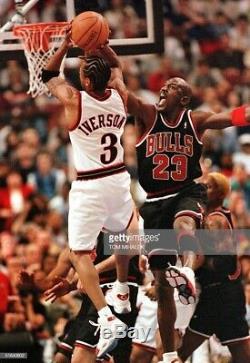 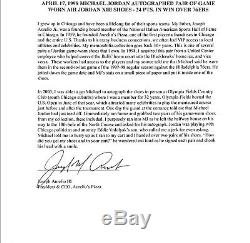 This Autographed Game Used 4/17/1998 Final Season w/ Bulls Nike Air Jordan XIII Shoes has been Personally Signed by Michael Jordan of the Chicago Bulls. This pair of Michael's Air Jordan XIII game-worn and autographed sneakers hail from that special 1997-98 season, his last in a Bulls uniform. Jordan wore these white/red mid-tops through the regular season and into the playoffs before introducing the AJ XIV in The Finals. According to a handwritten note left in one of the shoes by a former United Center employee (not included), to whom MJ gifted the shoes, Jordan had these on during Chicago's 87-80 road win over the 76ers on April 17, 1998. He netted 24 points and grabbed six boards that night, playing ferocious defense with five steals and holding Allen Iverson to a miserable 4-17 shooting performance.

Jordan was, after all, voted NBA 1st Team All Defense nine times. There's a great style/photo-match (Getty 51640602) with MJ all over one of AI's shot attempts. A detailed letter of provenance from the original collector explains that he got the pair from one of the workers tasked with changing the court and ice surfaces between Bulls and Blackhawks games.

The size 13.5 sneakers with accurate Nike tagging show adequate wear inside and out. Michael has signed the right shoe on the outer ankle in black marker. The autograph was obtained in-person in 2003 while Jordan was playing golf at Olympia Fields C. The details of which are also included in the LOP. Includes letter of provenance from consignor, CEO of one of the oldest pizza chains in Chicago and all of the U.

Full LOA from JSA for autograph. We offer autographed memorabilia only from the top, reputable, leading suppliers of authentic sports memorabilia. The companies that authenticate these items include Professional Sports Authenticator (PSA/DNA), James Spence Authentication (JSA), Steiner Sports, Upper Deck, Mounted Memories, and Tri-Star Productions. All autographed items come with a Certificate Of Authenticity (COA) from these suppliers that include a hologram on the item.

The item "Bulls Michael Jordan Signed Game Used 4/17/1998 Nike Air Jordan XIII Shoes JSA" is in sale since Wednesday, August 7, 2019. This item is in the category "Sports Mem, Cards & Fan Shop\Game Used Memorabilia\Basketball-NBA". The seller is "presspasscollectibles" and is located in Scottsdale, Arizona.