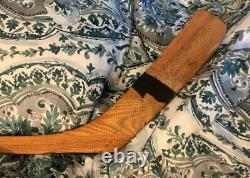 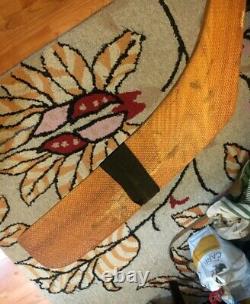 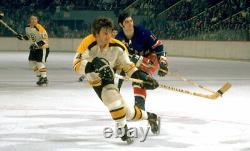 An authentic game used from 1972 of Boston Bruins legend Bobby Orr. The Victoriaville stick has all of its original and 100% correct tape on both ends. Stick shows real game use, with puck and stick marks on the blade. Has darkened a bit over time, like many old sticks do. It is in fine overall condition. Signed by 14 B's on the backside of the shaft, with Orr, Phil Esposito, Gerry Cheevers, John Bucyk, coach Tom Johnson, Wayne Cashman, Ken Hodge, Ted Green, Fred Stanfield, Don Marcotte, Reggie Leach, Dallas Smith, Rick Smith and Matt Ravlich.

With the exception of Cheevers', the felt tip autographs are light, but you can make them out pretty good in-person. This is a legitimate game used Orr stick, not an extra he gave away to charity cause he didn't like the way it felt in his hands before a game. Obtained directly from the 8 time Norris winner by one of his teammates in 1972. The Boston Bruins ended up winning the Stanley Cup in May, with Orr capturing the Conn Smythe Trophy as playoff MVP.

The item "Bobby Orr original game used team signed 1971-72 Victoriaville stick Bruins" is in sale since Tuesday, November 10, 2020. This item is in the category "Sports Mem, Cards & Fan Shop\Game Used Memorabilia\Hockey-NHL\Sticks". The seller is "ghl99" and is located in West Greenwich, Rhode Island.