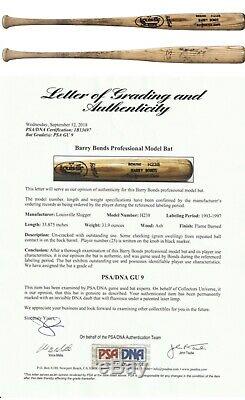 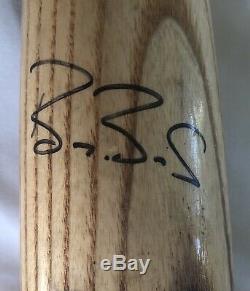 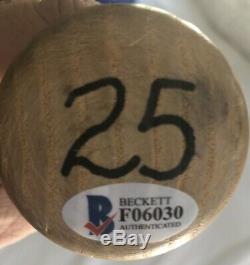 After his first seven seasons were spent with the Pittsburgh Pirates (1886-92), home run king Barry Bonds signed a free agent contract with the San Francisco Giants. For the first five seasons between 1993-97, Bonds averaged 40 home runs, 108 RBI and a lofty. Bonds, in his first season with the Giants in 1993, was the National League MVP.

This offered Louisville Slugger H238 model bat was used by Bonds during the 1993-97 seasons. This bat displays heavy game use and is un-cracked. There are ball marks and stitch impressions present on the barrel, along with checking or grain swelling from repeated ball contact. Bonds number 25 is hand written in black marker on the knob and Bonds has signed his name in black marker on the barrel. This bat comes with a LOA from PSA/DNA (1B13697) for the game use and has been graded a near-perfect GU 9.

There is also a COA from Beckett Authentication Services (F06030) for the signature. The item "Barry Bonds Signed Game Used Bat 1993-1997 PSA GU 9 Giants" is in sale since Wednesday, July 22, 2020. This item is in the category "Sports Mem, Cards & Fan Shop\Game Used Memorabilia\Baseball-MLB\Bats". The seller is "bondsbats" and is located in Sunnyvale, California.