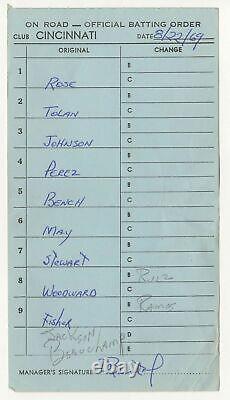 The 1969 Major League Baseball season had the Cincinnati Reds finishing in third place in the newly established National League West, four games behind the NL West champion Atlanta Braves. The Reds were managed by Dave Bristol, and played their home games at Crosley Field, which was in its final full season of operation, before moving into their new facility in the middle of the following season. The Reds led the major leagues this year with 798 runs scored.

1969 not only marked the 100th anniversary of the original Cincinnati Red Stockings being the first fully professional baseball team, but it also marked the first year of divisional play in Major League Baseball. The Reds (along with the Atlanta Braves) were placed in the National League West division, despite being located further east than the two westernmost teams in the NL East division, the Chicago Cubs and St. This was because the New York Mets wanted to be in the same division as the reigning power in the NL, which were the Cardinals at the time (to compensate for playing against the Dodgers and Giants fewer times each season). The Cubs consequently demanded to be in the NL East as well in order to continue playing in the same division as the Cardinals, one of the Cubs' biggest rivals. A side effect of this alignment is that it set the stage for what is considered one of the greatest pennant races - and comebacks in such a race - in MLB history. Offered is the official Batting Order Lineup card filled out and signed by Manager, Dave Bristol. This was the lineup card given to the Umpire and listed a few substitutions. This dated from August 22, 1969. This was a doubleheader vs the Pittsburgh Pirates in Forbes Field in which the Reds lost 8-2 with Dock Ellis being the winning pitcher and Jack Fisher on the losing end. Johnny Bench, Pete Rose, Tony Perez were in the lineup that day. Chico Ruiz was brought in to pinch hit. From the beginning of the Big Red Machine. Baseballs, footballs, etc we pack items in boxes using bubble wrap, popcorn, heavy paper to again, ensure that your package arrives to you safe and sound. This is not a for profit part of our business. Lifetime authenticity guarantee from world renowned autograph dealer, Richard Albersheim. Autograph and sports memorabilia expert on the ABC tv show, Ball Boys.

This item is in the category "Sports Mem, Cards & Fan Shop\Game Used Memorabilia\Baseball-MLB\Other MLB Game Used Mem". The seller is "albersheims" and is located in this country: US.