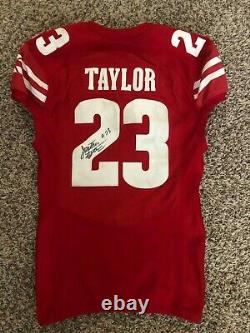 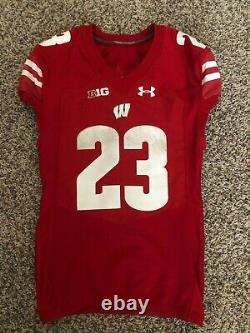 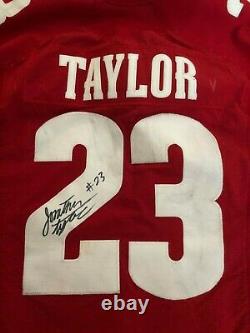 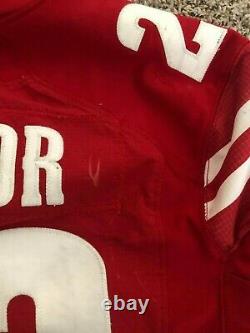 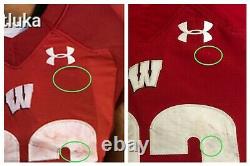 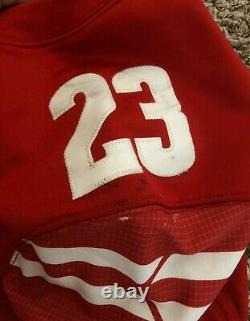 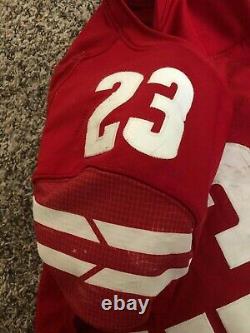 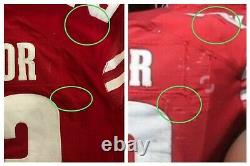 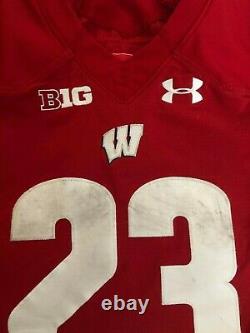 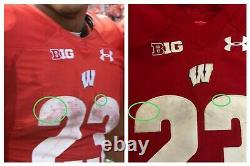 This jersey was worn for the first 3 games of the 2018 season. This size 44 jersey shows tremendous use with multiple hit marks, team repairs, and stains from the football present on the front numbers. It is flag tagged with 2017 in the collar but was carried over for the 2018 season, something Wisconsin routinely does. The three games in which the jersey was worn along with Taylors stat lines from the game, were as following: 8/31/18 vs Western Kentucky 18 carries, 145 yards, 2 Tds.

9/8/18 vs New Mexico 33 carries, 253 yards, 3 Tds. 9/15/18 vs BYU 26 carries, 117 yards, 1 TD. It was obtained directly from Jonathan Taylor at the end of his collegiate career and has been signed on the back #2 in black marker. Additionally the jersey has been photomatched to these multiple games.

Jonathan Taylor has gone on to have a fantastic rookie season with the Indianapolis Colts after being selected in the second round. He set the franchise record for most yards in a single game in Week 17 of the season against the Jaguars on his way to winning the NFL Rookie of the Month Award for December.

Taylor is also the only rookie in Colts franchise history besides HOFer Edgerrin James to finish a season with over 1,000 rushing yards, and 10 TDs. The item "2018 Jonathan Taylor Signed Game Used Wisconsin Badgers Jersey COLTS PHOTOMATCH" is in sale since Thursday, January 21, 2021. This item is in the category "Sports Mem, Cards & Fan Shop\Game Used Memorabilia\Football-NFL\Jerseys".

The seller is "fruityfoot" and is located in New Berlin, Wisconsin. This item can be shipped to United States.