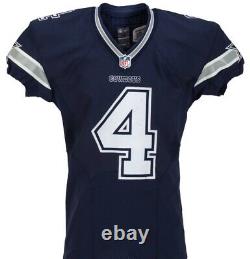 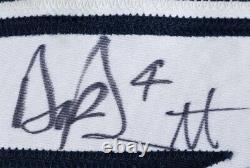 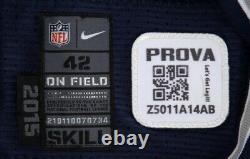 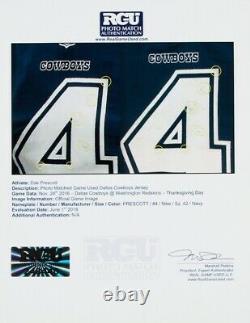 2016 Dak Prescott Game Worn & Signed Dallas Cowboys Rookie Jersey , Unwashed--Photo Matched to Thanksgiving Victory over Redskins. To paraphrase Charles Dickens, it was the worst of times, it was the best of times. After suffering through a ten-loss 2015 following the season-ending injury of their superstar quarterback, the hearts of Cowboys fans sunk to new lows with the news that a preseason exhibition game had re-injured Tony Romo, yet again beyond speedy repair. The 2016 season was lost before it had even begun, Dallas lamented, as the fallback plan was an untested rookie named Dak Prescott, the team's fourth-round selection in that year's NFL draft. He'd lose the career/season opener by a single point to the New York Giants before stringing together a stunning chain of eleven straight victories for the'boys, making the competition for 2016 NFL Rookie of the Year a two-man race against his own running back Ezekiel Elliott.

The offered gamer exhibits marvelous game wear from the tenth of that eleven-game ROY winning streak, the various impact marks allowing for a definitive photo match. Prescott would go 17 for 24 with 195 yards and a touchdown in the thrilling 31-26 victory. He would also find paydirt himself with a six-yard scamper in the fourth. Remarkably, thirty-four of the game's fifty-seven points came in the fourth quarter, giving a massive Thanksgiving Day national television audience some high-quality entertainment. The navy mesh beauty features a number "4" boldly applied in white tackle twill to chest, shoulders and verso, and "Prescott" applied to rear nameplate.

Waistband is elasticized, and rear numeral is autographed in bold black sharpie with a notation reading, Stay Up & Be Blessed, Much Love! LOA from RGU Photo Match Authentication. Full LOA from PSA/DNA (autograph).

The seller is "dalcowgamejerseys" and is located in Granada Hills, California. This item can be shipped worldwide.