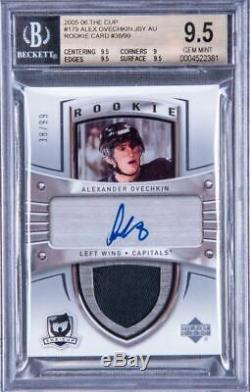 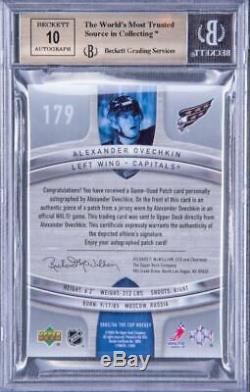 This amazing and rare 2005/06 Upper Deck "The Cup" #179 Alexander Ovechkin. Graded GEM MINT 9.5 by BGS, with signature graded "10" by Beckett. The Stanley Cup Champion and perennial NHL All-Star has placed a vibrant, blue ink signature on the obverse of this "The Cup" entry.

The card's design also incorporates a swatch taken from a jersey worn in game action by the Capitals star. The card's BGS condition report: Centering 9.5, Corners 9, Edges 9.5, Surface 9.5. A congratulatory statement from Upper Deck appears on the card's reverse side; this declaration attests to the signature's authenticity, verifies the origin of the card's "patch" component, and serves as the COA for the subject item. The limited-edition piece is serial-numbered 38/99. An extraordinary, top-level collectible of the superstar athlete, in Gem Mint condition from one of the greatest hockey stars of all times. This is without a doubt one of the most collectible hockey cards available anywhere today! The item "2005/06 UD The Cup #179 Alexander Ovechkin Game Used Patch Signed Rookie Card" is in sale since Sunday, December 8, 2019. This item is in the category "Sports Mem, Cards & Fan Shop\Sports Trading Cards\Ice Hockey Cards". The seller is "earthmotorcars2" and is located in Carrollton, Texas. This item can be shipped to United States.