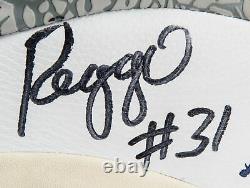 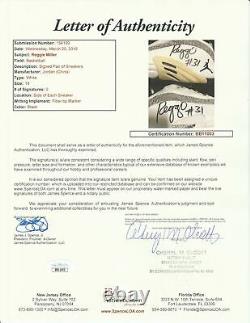 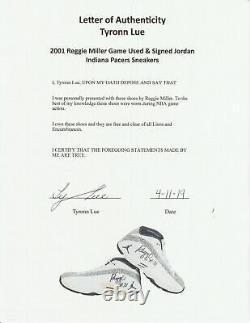 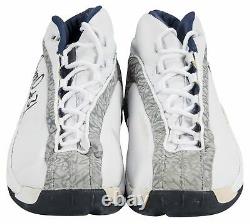 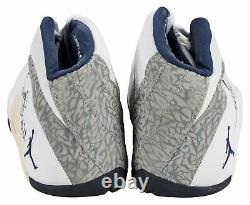 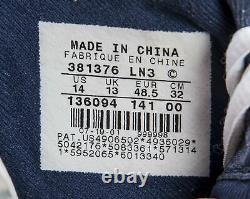 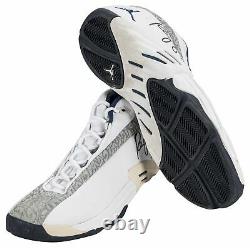 The Hall of Fame guard and Spike Lees nemesis Reggie Miller wore these Jordan sneakers during the 2001-02 season, his 15th year in the NBA. Miller continued to shoot with deadeye accuracy, scoring 16.5 points on. 911 shooting splits, with his free throw percentage leading the NBA. These offered sneakers are size 14 and are white with gray and blue accents. A blue Jumpman logo is embroidered on each heel.

Miller has signed both shoes in black marker. These sneakers originate from the personal memorabilia collection of Tyronn Lue, who was gifted the shoes by Miller after a game. These shoes come with a LOA from Tyronn Lue and a LOA from JSA (BB11003).

Reggie played his entire 18-year NBA career with the Indiana Pacers. Miller was known for his precision three-point shooting, especially in pressure situations and most notably against the New York Knicks, for which he earned the nickname "Knick Killer".

When he retired, he held the record for most career 3-point field goals made. He is currently second on the list behind Ray Allen. A five-time All-Star selection, Miller led the league in free throw accuracy five times and won a gold medal in the 1996 Summer Olympics.

Miller is widely considered the Pacers' greatest player of all time. 31 was retired by the team in 2006. Currently, he works as an NBA commentator for TNT.

On September 7, 2012, Miller was inducted into the Naismith Memorial Basketball Hall of Fame. The item "2001 Reggie Miller Game Used & Signed Jordan Indiana Pacers Sneakers" is in sale since Tuesday, February 25, 2020. This item is in the category "Sports Mem, Cards & Fan Shop\Game Used Memorabilia\Basketball-NBA". The seller is "heartlandsportsmemorabilia" and is located in Fishers, Indiana. This item can be shipped to United States.