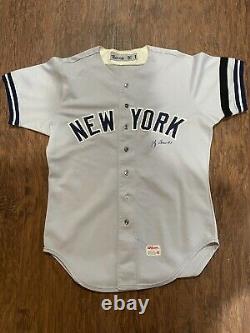 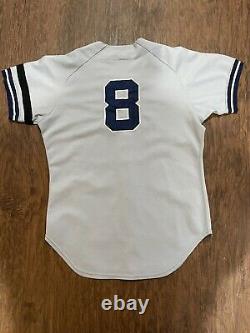 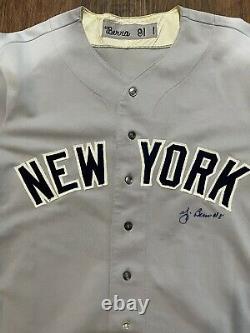 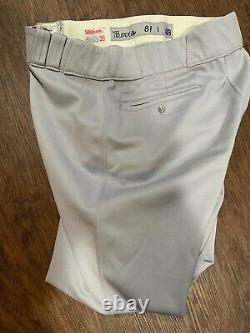 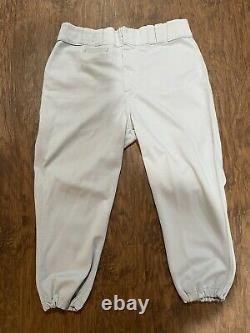 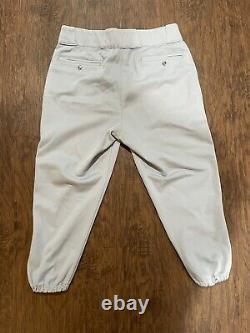 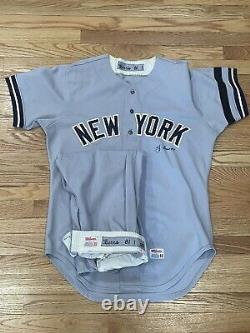 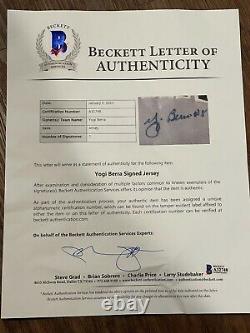 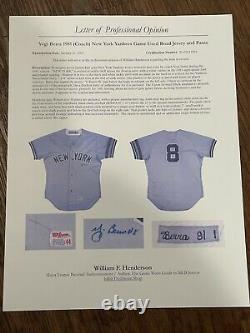 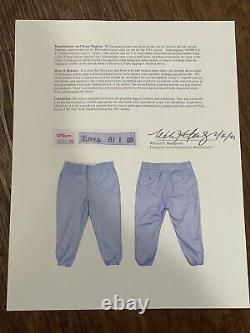 1981 Yogi Berra Game Used Signed Yankees Coaches Uniform. Jersey is signed on the front by Yogi and has a Certificate of Authenticity from Beckett for the signature.

The jersey shows tons of use and is authenticated by William Henderson (MLB Authentications) and includes a two page description of the jersey and pants. It is clear that this jersey has been worn and washed many times; all lettering shows signs of puckering, fabric edge-softening and a few loose threads from repeated washing and player use. The linen placket lining is stained from sweat around the neck and yellowed throughout. Jersey is original with no alterations, and appears to have been pulled from circulation and avoided a second life in the minor leagues as was so common with most Yankee jerseys of the period. The second button from the bottom is a non original replacement.

There is a random blue pen mark just above the Wilson tag that undoubtedly happened when Berra autographed the jersey. This jersey and pants were Yogis first set from the season. Please see pictures for COAs for the signature and the uniform/pants. The jersey and pants are properly tagged, lettered, and numbered.

They are consistent with known exemplars, exhibit appropriate use and wash wear, and appear to have no alterations of any kind. The Elston Howard black armband is properly sewn to the end of the left sleeve, properly for 1981 leaving about an inch of gray jersey fabric showing between it and the sleeve-end trim. Yogi was an 18x All-Star, 13x World Series Champ, 3x AL MVP, Number 8 Retired by the Yankees, a New York Yankee Monument Park Honoree, and part of the MLB All-Century Team. This is a one of a kind game used item and is a part of Yankees history! This item is in the category "Sports Mem, Cards & Fan Shop\Game Used Memorabilia\Baseball-MLB\Jerseys".

The seller is "22antman22" and is located in this country: US. This item can be shipped to United States.