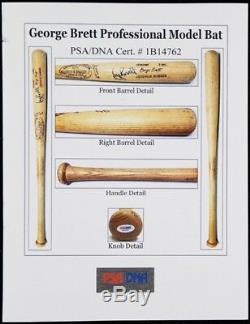 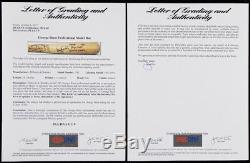 Most of the George Brett bats are from the 1980's or early'90's - when his popularity had soared. Brett's 1970's game-used bats are a valued commodity in the game-used bat collecting industry. From 1977-79, the years in which this bat dates, Brett averaged forty doubles, fourteen triples, eighteen home runs, eighty-six RBIs, a. 313 batting average, and only thirty-two strikeouts per 629 plate appearances.

This Hillerich & Bradsby model T85 bat (34.5 and 33.3 ounces) was used by the Hall of Famer between 1977-79. Moderate use is revealed with ball marks on the barrel, green bat rack markings, and light pine tar residue on the upper handle.

Bat authenticator extraordinaire, John Taube, who examined this particular exemplar noted that the pine tar residue seen here is the perfect level of application for Brett in the mid- to late-1970's. A PSA/DNA sticker placed on the barrel end authenticates the 9/10 blue sharpie autograph. LOA from PSA/DNA, GU 9.

The seller is "vintagecardboard" and is located in Prairie Village, Kansas. This item can be shipped to United States.